`The speeches of Comrade Seetharam Yechury on 20 different topics of recent issues were translated into Tamil by CPM owned Bharthi Publishers and released in Chennai. Com Rengarajan asked me to be part of the function in which Mr Yachuri participated. I made the following observation:
The speeches in Parliament record is for the use of many generation to learn about the various issues and the solutions suggested by individual members of the Parliament. It is the greatness of Parliament which has the capacity to bring the Executive to realisation of the People demands and their participation in the democraatic governance . In the event of the day, the presence of different political party leaders, religious heads, Film Directors, writers , free lance left thinkers showed on the purpose that is to stop the retrograde force BJP to further extend their anti people programmes. GST is used by BJP to make India loose its federal foundation as unitary Governance which is against the Constituion of India. The GST was against the rights of State governance well established by quoting Dr Ambedkar in Constitional Asswmbly explaining the need for taxing powers and non interference by Union government as the Consitituional powers listed for Union government is much more than the State government in State List compared with the Union List in eighth schedule of Constituion of India. Mr yechury quoted Dr Ambedkar speech in this regard. CPM, CPI, DMK and TMC opposed the move of BJP to usurp the powers of State Government . AIDMK leader Ms Jeyalalith was the champion for this cause till her death. But it is sad to see the successors in ADMK were not worried about the importance of this economic rights of State. Mr Yachuri is on record with British government official version of Sangh parivar being against the quit India movement in 1942 and the way they helped the Colonial government. Mr Yachuri was leading the team for preparation of Common Minimum Programmmes for UPA . The programmes of Mahatma Gandhi Rural Employment Guarantee Act implantation was delayed by FInance Ministry by one year for insufficient fund . The myth of the claim that the Navarathna Public Sector shares are to be sold to meet additional fund of ₹10,000 Crore per year to the extend of ₹40,000 in the final 2010 was bust by CPM led Prakash and Yachuri team with calculations to meet the budgedry demands convinced Madam Soniaji and Rahulji to compel immediate implementation of the MANREG Act through their won government . Similarly the Congress lead government action of debt relief to Agriculturists to the tune of ₹78,000 crore was claimed by Yachuriji speech that their part is also there . American imperialism to Tomato prices rise were raised by him in the Parliament .His period of leadership in the Delhi Jawaharlal University Students Union and BJP governments attrocity to Dalit students were forcibly recorded in his speech. The need for defining Patriotism and non Ptriotic according to the BJP government is to be defined properly by a Parliamentary committee according to his demand in the Parliamentary democracy. The historical recollection and comparing triple K movement with triangle White over wearing in USA to kill black American citizens till 1940 were enacted in 2017 to kill the meat and pork eaters in India is a caution to National unity in diversity as Yechuryji recorded in Parliamentary speeches.
The book release event is recollecting the days of UPA 1 when the Left parties were supporting the then Congress government without participating in the government. Those days are good for precautionary overarching and regulating the direction to achieve Common Minimum Programme. The future also needs such co operation to stop the communal forces and anti people BJP from capturing the Power. 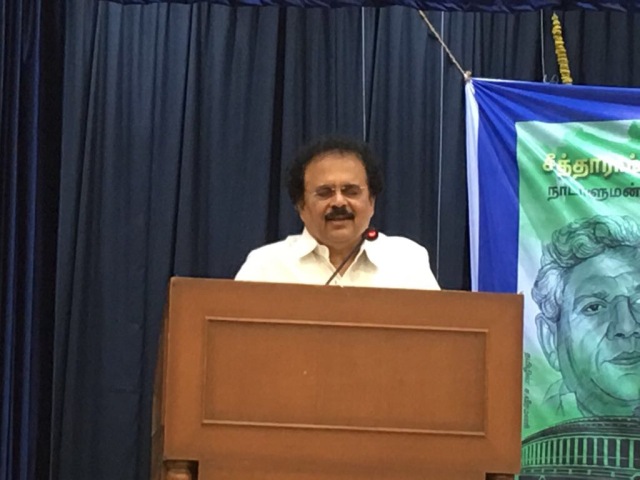